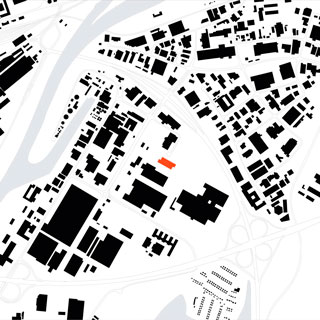 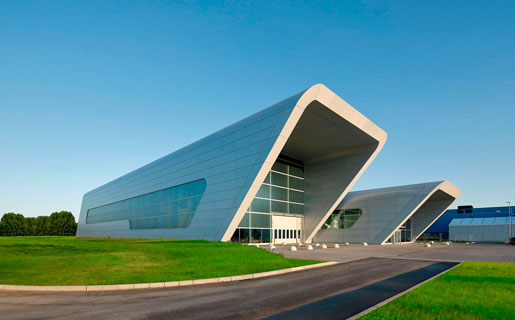 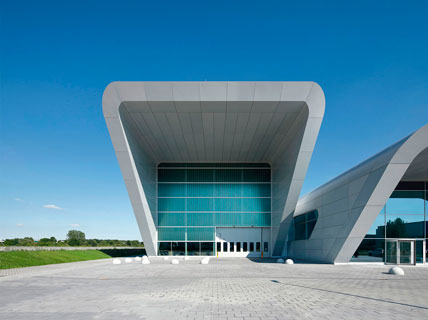 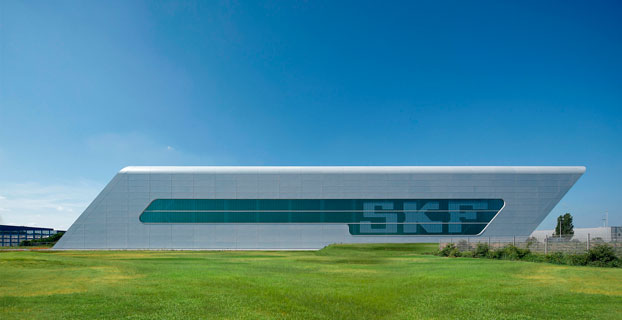 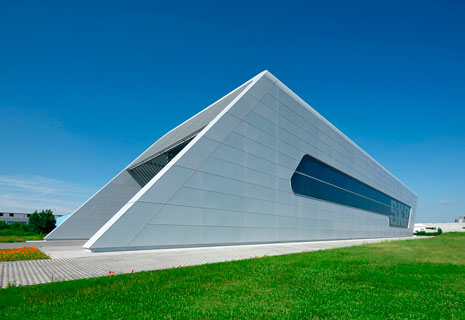 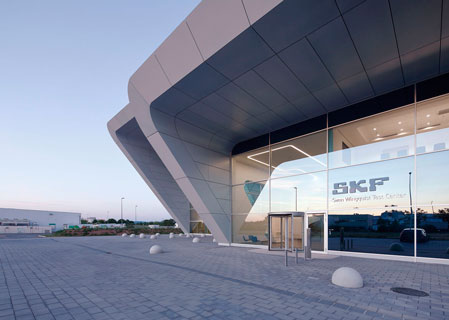 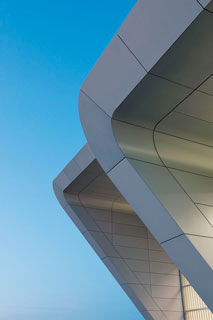 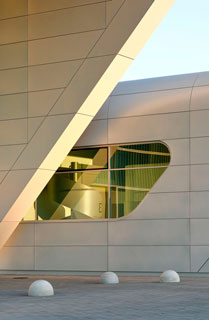 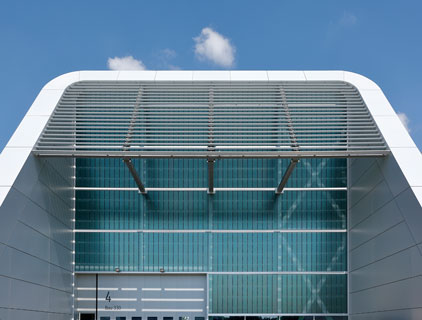 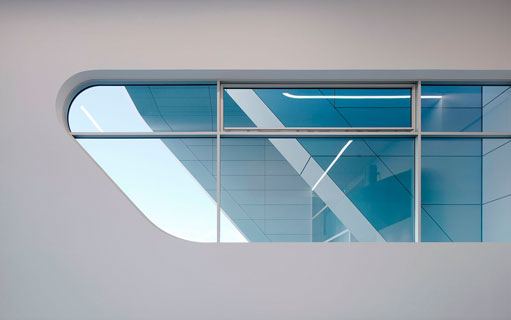 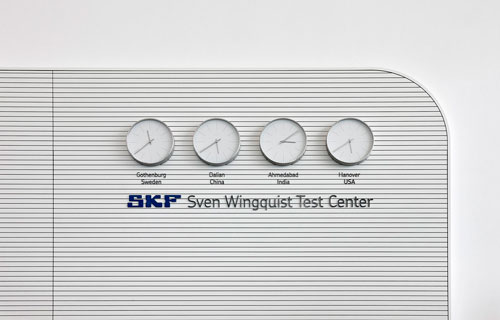 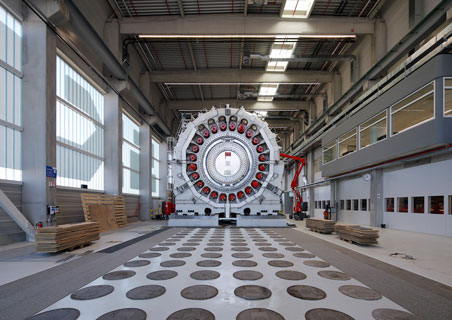 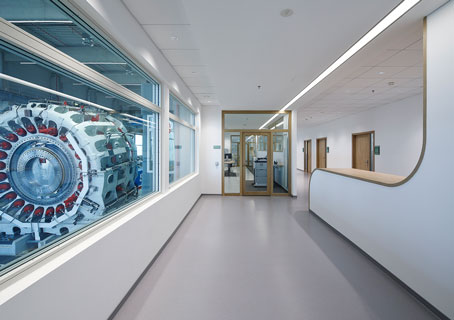 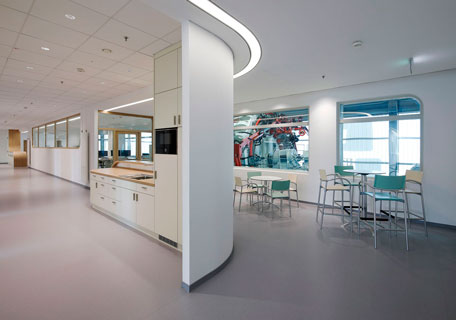 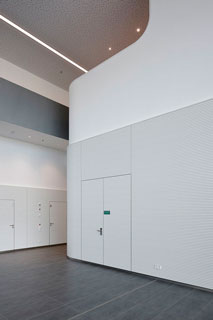 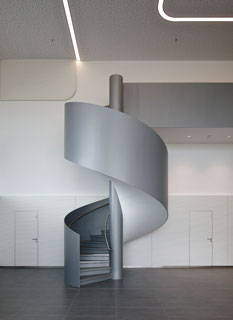 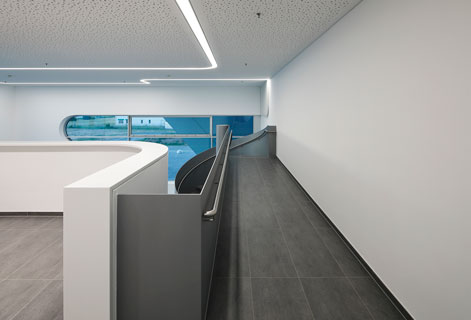 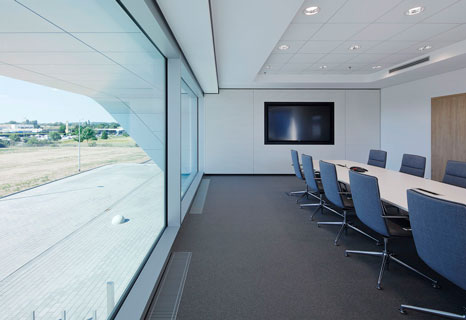 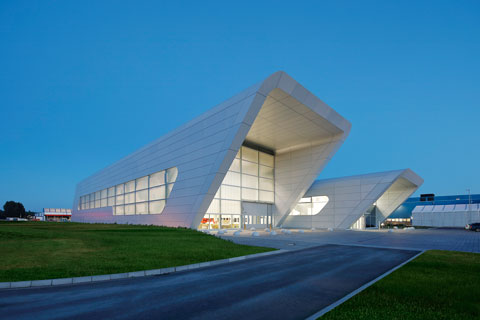 Superlative power: On the 21st June 2017 the worldwide highest-performance test centre for large scale bearings was inaugurated in Schweinfurt.

The new Sven Wingquist Test Centre is located in the south of the city and completes the SKF competence centre as its final element. From now on the new facility will be testing large bearings for wind power plants as well as for shipbuilding, mining and paper industry and further for cement and steel sector.

After 110 years of its successful history the company, which is still having a worldwide significance as one of the leading technology pioneers, has got a new corporate architecture: the aerodynamic appearance of the new construction and the interpretation of the SKF logotype by flowing, rounded forms embody the use while the materials represent high technological standards.

Two volumes of different height, positioned parallel to each other are the basis of the new construction. They celebrate the wind and the energy by their striking inclination. This dynamic form illustrates the power, which the test centres develop while testing single bearings as well as bearing assembly units under almost real conditions: up to 10 meganewton.

The both halls, which are located on a 14 hectare plot, are massive constructions with reinforced concrete columns and a base slab made of fibre and reinforced concrete on a sleeve foundation. The façades are clad with reflective white aluminium panels. On the elongated north façade an impressive double profiled glazing displays the logotype with large-scaled letters. At night the oversized window with rounded corners enlightens the nearby highway and also refers to the spotlights of the SKF-Highrise, which stands only few hundreds of meters further on the waterside. The connection of both underlines additionally the urban relevance of the company.

Each volume has its own function. Two test centres for large scale bearings as well as two smaller test centres are located in the higher one-storey hall. An overhead crane for 110 tonnes ensures the levelling of the highly sensitive mechanical components. The smaller two-storey hall comprises areas with different technical functions, storage spaces as well as workshop zones. Office areas, the Control Room, a media centre with conference spaces complete the profile of the new building. Also the interior design follows consequently the flowing wind-leitmotif as one can perceive by looking at the cladding of the acoustic walls, the ceiling, the light concept and other interior details.

After its completion the striking new construction became a pioneer for renewable energies and energy-efficient technologies. Funded by two government programs with a total of Euro 3.5 million the project is seeking for a LEED Gold certificate. As a new symbol for the German environmental policies the Sven Wingquist Test Centre has already become a landmark for the city of Schweinfurt.