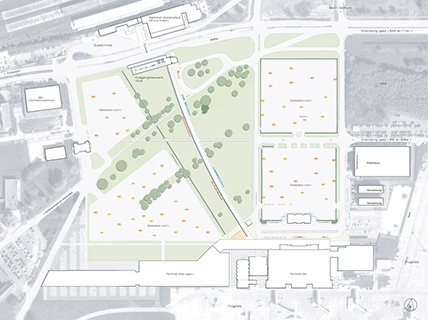 Restructuring of the entrance area to the Berlin-Brandenburg airport between terminal buildings and railway. First price in the competition.

The newly built roofed footpath from the terminal to the station provides not only a more direct connection, which enables public transport users to dispense with an umbrella on rainy days, but gives the whole front section of the airport an organic unity and a distinct spatial quality designed to facilitate orientation. The roof follows the gentle curve of the pathway and guides the traveller unobtrusively to the assembly point in front of the air terminal. The construction of the roof embodies the concept of light filigreed simplicity. Prefabricated reinforced concrete members supported by a steel structure based on a 5-metre planning grid have a built-in gradient and a protective coating on the top surface. They are designed to convey rainwater to the edge of the roof and from there onto the open green areas. At the same time, the steel structure on the west side serves as a framework for a glazed weather protection barrier with integrated advertisement display cases and silkscreen prints depicting various travel destinations. For the sake of variety, the display cases, along with built-in downlights highlighting the "SXF" logo, are located at various positions in the spaces between the columns along the way to the Info-Tower in front of the terminal.