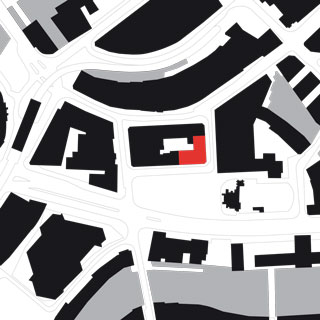 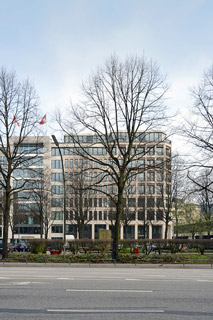 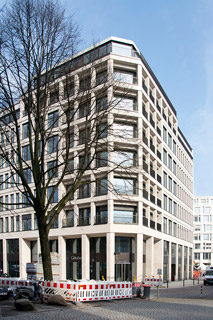 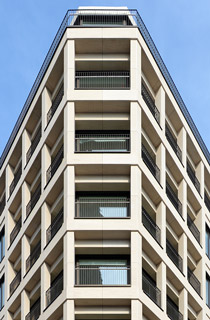 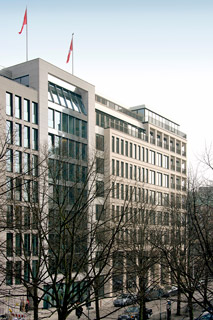 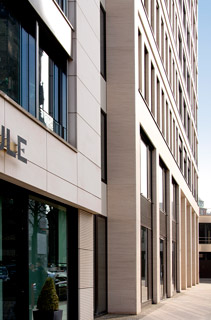 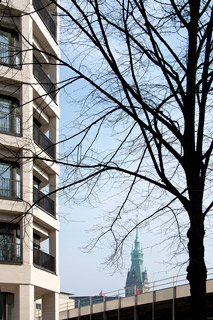 As one of Hamburg's urban hubs, the Hopfenmarkt is as rich in history as it is lively and bustling. The heterogeneous development, which includes the ruins of the Nicolaikirche and the Allianz high-rise, was completed in terms of urban development with the new office and commercial building. At the same time, the existing block structure was taken up and accentuated by the discreet emphasis on the corner of Hopfenmarkt and Hahntrapp.

The building is built in the tradition of a Kontorhaus from the time around the early 20th century. With its height and materiality, the volume follows the adjacent building at Hopfenmarkt 31 and the Hindenburghaus. The light-coloured natural stone façade is discreetly structured and is characterised by a balanced combination of stone and glass surfaces.

The two-storey base is extensively glazed, above which the façade is structured by one- to three-axis spans of the openings, which lends vividness to the appearance through exciting plays of light and shadow. The upper two of the total of nine storeys are set back. While the floors 3 to 7 are only equipped with loggias at the corner of the building, the two set back floors have rows of loggias and balconies. The overall generous glazing ensures wide views, which the users can enjoy especially here at Hopfenmarkt.

Inside, the variable floor plans allow the users to create individual office situations according to their business requirements, such as an open-space concept or an office space spread over several floors. The equipment of the rooms always remains high-quality and modern.

In addition to retail space and gastronomy on the ground floor, the new building houses a total of 21 office units and four residential units on the two set back floors. The courtyard was built on the first floor. The building received a DGNB pre-certificate in gold.