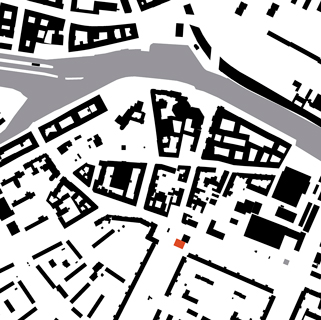 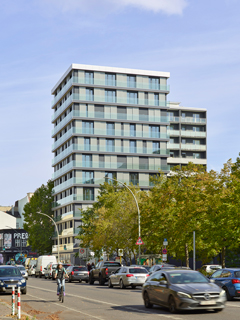 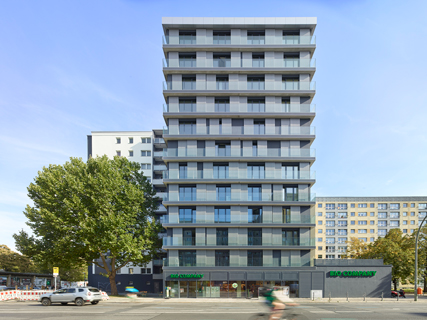 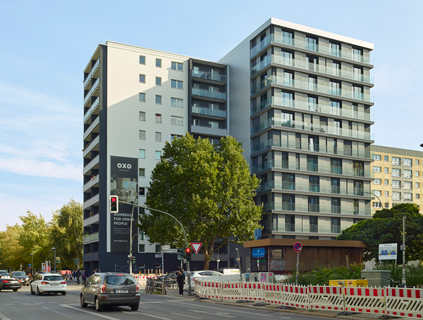 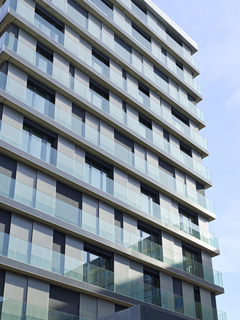 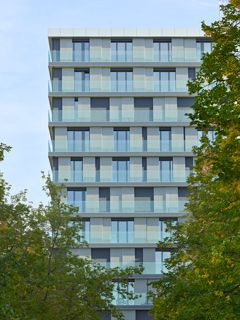 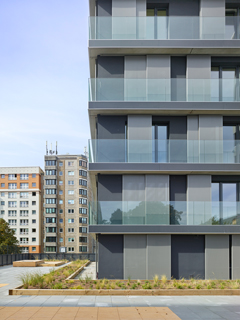 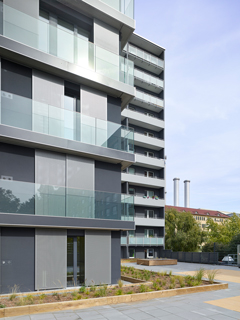 The new residential tower Koepenicker Strasse 103 is located in Berlin-Mitte, centrally situated between the Maerkisches Museum, the banks of the Spree, the Jannowitzbruecke and not far from the Oranienkiez district of Kreuzberg. The urban quarter is characterised by a lively gastronomic, cultural and club scene. The twelve-storey new building with its 77 flats connects directly with a refurbished and modernised existing building from 1984, the OXO Apartments Berlin-Mitte, whose geometric floor plans are intended to recall the computer game OXO developed in 1952 and which gave the overall project its name. Both buildings form an ensemble of old and new.

The façades of the new residential tower are clad with light-coloured Alucobond panels in the area adjacent to the existing building, which harmonise with the colouring of the existing façades.

Towards Heinrich-Heine-Strasse and the rear of the existing building, horizontal, dark grey balconies with white glass parapets run along the façade from the first floor onwards, projecting 50 cm as French balconies. All windows along the balconies are floor-to-ceiling, provide plenty of daylight in the flats and have sliding sunshade elements made of perforated metal in light grey. In addition to the private balconies, a public, green terrace with a 154 sqm playground was planned for all residents on the roof of the ground floor.

The building is accessed via the forecourt. The entrance for the organic supermarket is on Heinrich-Heine-Strasse, while deliveries are made separately via the access road from Koepenicker Strasse.

A basement was built underneath part of the property and will house the cellar compartments, storage and technical space.