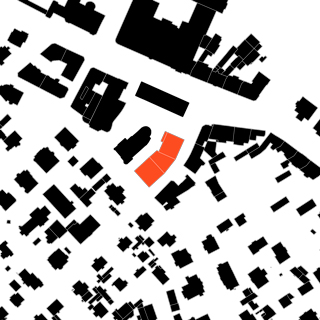 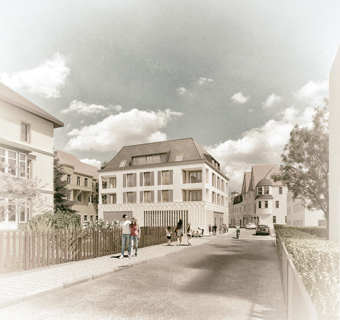 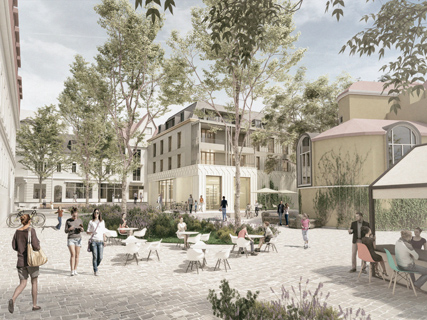 Dresden's villa district ‘Weisser Hirsch' with its unique architecture, which is influenced by the Wilhelminian period, and its numerous monuments is of great importance for the city's history. In the heart of the quarter, close to the Kurhaus, a residential and commercial building is being built as a new building block of the district centre. With its architecture, façade design, the eaves and ridge heights and the inclusion of the adjacent room edges it is sensitively integrated into its urban environment, but nevertheless has a unique character.

Two building sections with a total of 15 residential units on the upper floors are planned, to a large extent barrier-free, retail use on the ground floor and an underground car park. Each flat will have a generous open space in the form of a loggia, which will be presented or retracted. The food market, which is important for the infrastructure of the quarter, will find an adequate, modern home in the new building, as will the drinks market, which is currently still located separately on the opposite side of the street.

The façade design, with a surrounding ornament of pilaster strips, quotes elements of historic market halls and also picks up on the Alpine Swiss architecture that characterises the White Stag. Generous glazing behind the pilaster strips creates transparency. The roofs of the residential buildings are to be given a modern tile covering in soft shades of grey. The market roof will be planted with greenery, and the flats on the first floor will thus have roof terraces of the same level. The underground car park, designed for 18 parking spaces, will be accessible at the north-eastern corner to Luboldtstrasse via stairs and lift, both publicly from outside and internally from the market.

In the course of the construction work, the central square behind the Kurhaus building is also to be redesigned: With a lot of greenery reminiscent of the historical gardens, the preservation of the old tree population and the rows of trees flanking the square in the future, as well as a wide range of seating options, the new square design will increase the quality of stay for residents.

As a result of the evaluation procedure for the urban development and architectural concept of the district centre ‘Weisser Hirsch', the competition entry by TCHOBAN VOSS Architekten prevailed over the other competitors and was recommended for realisation.

According to Henkel Projekt Management GmbH, construction is to begin at the end of 2021 or the beginning of 2022.