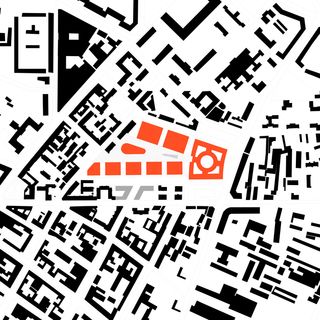 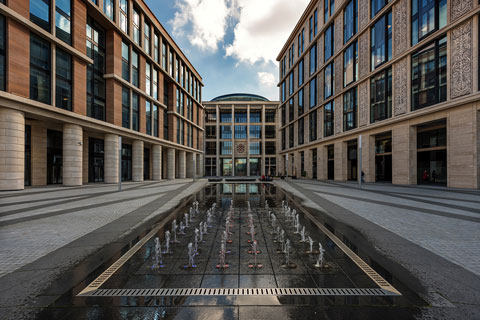 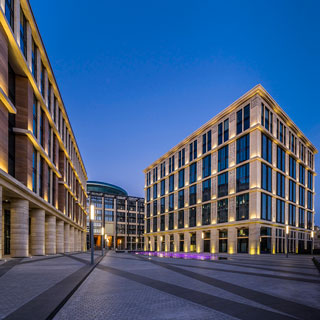 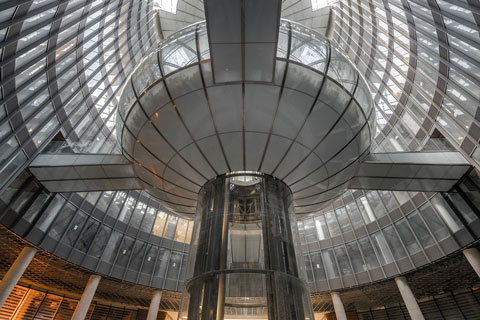 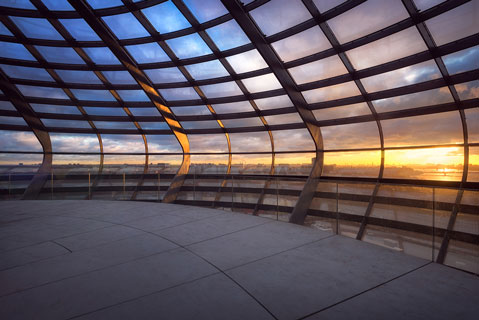 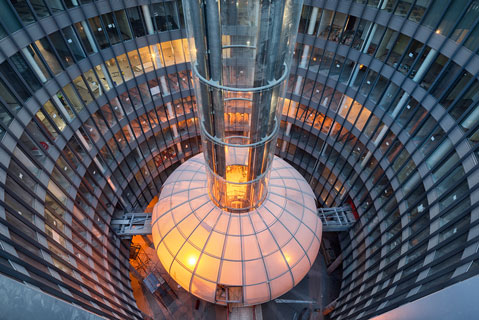 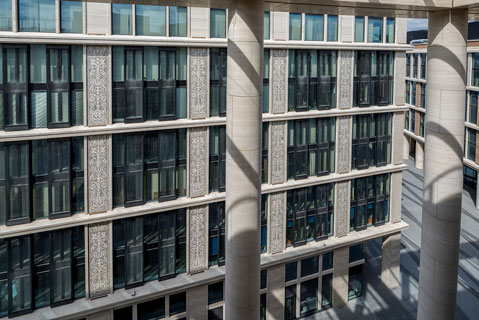 The new administrative and business district Nevskaya Ratusha in the city centre of Saint Petersburg is characterized by a high variety of different uses comprising a government building, business-centres, hotels, commercial und public spaces. Its structure is very clear: Along the both long sides of the plot two rows of buildings of simple geometry are leading towards the city hall building which is the heart of the ensemble. Two business-centers and the city hall have been completed by now.

Equal building heights and scales as well as equal spaces between the buildings create altogether a harmonic pattern, which moreover ensures a continuous connection with the surrounding. The entrances of the business-centres together with the accesses to several shops, cafés and the fitness-centre are situated around the inner public square. A two storey-high arcade connects the buildings offering a covering walk.

Both business-centers have a very clear and simple floor plan grid. Being a sit of public administrative bodies the city hall however became an architectural dominant with its 55 meters height and expressive appearance. Its main distinctive façade facing the Novgorodskaya Street is accentuated by rounded columns. The design of the city hall is focused on the maximum transparency of the administration towards the citizens so they could perceive it by means of particular architectural structures as floor plans, façades or landscaping design.

The central atrium becomes core of the building by uniting all public spaces of the ground floor. Further spaces for public use are located in the cylindrical inner court yard and the lens-shaped futuristic glass dome. An impressive rounded glass cabin for up to 25 persons transports the visitors to the observation desk with a panoramic view of the city where they also can find an exhibition showing different design stages of the Ratusha ensemble. Furthermore the ground floor comprises several lounges, a foyer, a waiting area, a visitors point and an info point, an exhibition hall, a conference hall, a press centre, a book store with a reading room and a café.

The combination of large-scaled glass surfaces with light natural stone details, as columns, pilasters and gateways gives the building its striking appearance independent from the daytime or weather conditions. The colonnade with 16 30-meters-high rounded columns stands in a six-meter distance to the façade and is covered by a cornice made of stone beams and glass panels. Not only this front side but the whole building is emphasized by the column leitmotif: the lateral façades have half rounded pilasters and the inner building front is highlighted by 22 rounded columns and a cornice as well.

While the base of the Ratusha is clad with Nero Impala Granit, other details are made of bright Travertino Romano. Additionally some further natural stones were chosen for particular façade details of both existing business-centres as well as for emerging buildings. The coat of arms of Saint Petersburg measuring 5 x 6 metres and made of coloured stones decorates the façade of the Ratusha which faces the inner court yard.

The glass parts of the façades are made as a double-skin construction having two glass layers of different textures. Such combination provides a unique solution in terms of energy efficiency and acoustic insulation. The outer layer consists of a 6 meter high multilayered tempered safety-glass giving the façade a light and vivid appearance.

The dome is constructed of 12 curvilinear steel frames varying from 1.5 metres at the base to 40 centimetres at the top of the dome. Additionally the top part of the glazing has a solar-protection glass layer. To ensure best possible view conditions the observation deck glazing was made of white glass with minimum pigment content. The distinctive elliptical form of the dome became already an important point of the city panorama and a symbol of the new neighborhood.