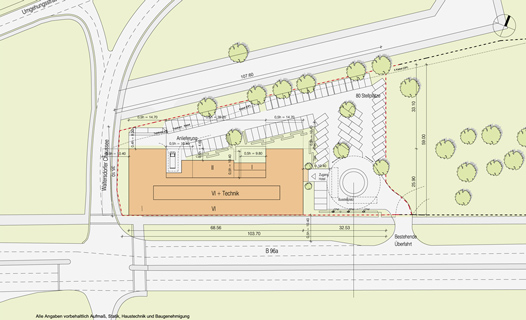 A new hotel with 200 rooms including one for use by wheelchair users is to be erected by “IVG Development Berlin Objekt Schönefeld I GmbHâ€ near Berlin's Schönefeld Airport. The construct will be formed by a six storey U facing the neighbouring streets (south and west side) and the east. It will contain a two storey base area oriented to the north. There will be 80 parking spaces to the east and north of the building. These will be accessed by an existent street on the neighbouring property. The ground floor of this building without basement will contain the foyer with reception and restaurant and the required supply units including back office, kitchen, sanitary areas, including one for wheelchair users, storage rooms, house technology and administration. The first storey above ground is primarily for public use. A foyer accesses conference rooms with adjoining pantry kitchen and a wellness area. An outside staircase leads from the lobby and bar area to a garden north of the building. The guest rooms are located in the four upper storeys. The perforated facade has vertical window forms and a plastered exterior wall. Large scale glazings encases the base area.